The journey of a protein in a glass of water 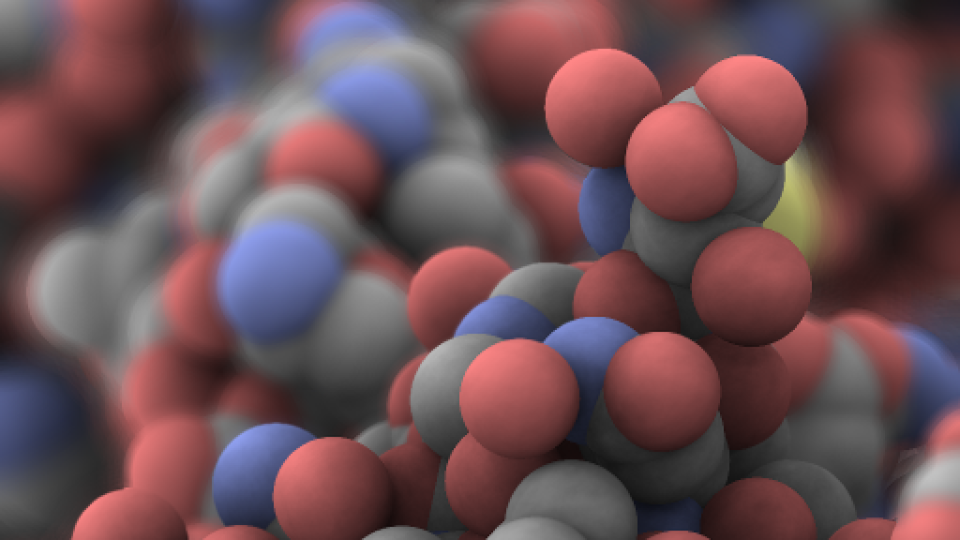 In this article, we will introduce the concept of molecular dynamics simulations and run a basic example using GROMACS on Qarnot’s computing cloud platform.

Molecular dynamics simulations are computational methods aiming to emulate the behaviour of atoms and molecules over time and space and thereby to study the behaviour of the global system they constitute.

These methods are mainly found in chemical physics, materials science and biophysics. They are used to test models of interactions between atoms, molecules and macromolecules (such as proteins, nucleic acids, etc.) which are phenomenons that cannot be observed directly. Thus, they allow to refine the models and to better understand the functions of molecules in their biological system.

Molecular systems typically consist of a very large number of particles, hence it is computationally intractable to study their dynamics analytically. Numerical methods are nonetheless particularly suitable for dealing with this complexity.

Molecular dynamics simulations consist in iteratively applying the equations of motion to each particle with time discretization. For each iteration, the acceleration of the particle is computed using its mass and the forces that are applied according to the given force field. With the prior position and velocity of the particle, its new position is determined after a small time step. By that means, starting from a given configuration, the trajectories of every particles are computed over the duration of the simulation.

Molecular dynamics simulations are usually divided into the following steps:

The amount of computations needed to perform a molecular dynamics simulation depends on the following parameters:

These parameters must be chosen with care to obtain exploitable results:

In consequence, molecular dynamics simulations may require several CPU-days to CPU-years of computational time. There is a compromise to reach between model complexity and computational power needs.

During a classical molecular dynamics simulation, the most CPU intensive task is the evaluation of the energy of all particles at each iteration.

Parallel algorithms allow the load to be distributed. For instance, the domain decomposition method distributes sub-domains of the system to be computed separately by cores working in parallel. This can dramatically reduce the computational time.

This section relies on Justin Lemkul’s Lysozyme in water GROMACS Tutorial to showcase the use of molecular dynamics on Qarnot.

We will consider a lysozyme protein in a box of water and analyze the dynamics of this system. Lysozymes are proteins found for instance in egg white or secretions like tears, saliva, milk and mucus. They also play a part in the immune system.

The lysozyme simulation will be run with GROMACS. It is one of the fastest and most popular molecular dynamics software packages. It is free and open-source and can run on central processing units (CPUs) and graphics processing units (GPUs).

The following files are needed to run this use case:

You can download all the files at once here.

Once you have downloaded the structure file (1aki.pdb), you can render it using a visualization program such as VMD, Chimera or PyMOL. 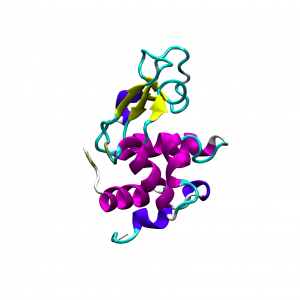 The following script runs the simulation:

For more details on this script and how to make the best use of GROMACS, please consult Justin Lemkul’s tutorial.

Qarnot’s cloud platform provides on demand computational power that can reduce the running time of an molecular dynamics simulation.

The first step to use Qarnot’s platform is to create a Qarnot account. Then, retrieve your personal configuration file qarnot.conf from the Acces token section of your Qarnot account.

Follow these steps to set up a Python virtual environment and install the Qarnot Python SDK.

Launching the use case

To launch the use case simulation on Qarnot, unzip the lysozyme-in-water.zip archive and rename the folder containing the files as input.

Then, copy paste the following script and save it next to your input folder and qarnot.conf configuration file.

Once the environment is ready, run python3 gromacs.py from a terminal to launch the computation on Qarnot (it can take up to 1h).

At any given time, the task can be monitored from the terminal or from Tasq. Once the task is completed, all output files will automatically be downloaded onto your local computer in an output folder. You can for instance open the md_0_1.gro file to render the final result using a visualization program such as VMD or with an online .gro files visualizer such as Groview. 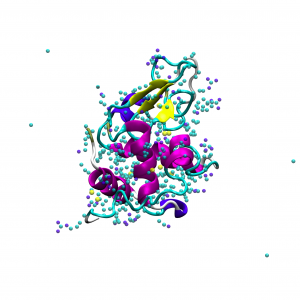 For more information on how to analyze the results of this simulation, see the Analysis part of Justin Lemkul’s tutorial.

Molecular dynamics simulations are essential to broaden our understanding of biological systems at microscopic level. But they are inevitably high demanding in computing power. If you do not have sufficient computational resources to meet your needs, using a cloud computing platform could be the solution.

We have seen how to run a molecular dynamics simulation with GROMACS on Qarnot’s high performance computing cloud platform. However, since Qarnot’s platform is based on containerization, you could use another software of you choosing to run a computation. You can find on the blog the list of already supported payloads in the Documentation section. You can also use one of your own Docker image or one from a public repository on Docker Hub. If you have any question, don’t hesitate to consult Qarnot’s documentation or to contact us at qlab@qarnot.com.

Want more bioinformatics content? You could read one of our other blog posts, and learn how to run a molecular docking simulation or a nucleotide sequence alignment on Qarnot.