How to run AutoML on a cluster to predict electricity prices ?

Machine-learning algorithms use statistics to find patterns in massive amounts of data. It is the process that powers many of the services we use today—recommendation systems, search engines, social media feeds, voice assistants. The list goes on.

Supposing there is a data set by which we want to obtain a predictive model. The traditional machine learning approach requires the following sequence of actions:

Automating this process is the focus of Automated Machine Learning (AutoML).

The essence of AutoML is to automate the above-mentioned tasks (which can take a considerable amount of time) so that data scientists can spend more time on business problems on hand in practical scenarios. AutoML also allows everyone, instead of a small group of people, to use machine learning technology.

In recent years, many excellent AutoML frameworks have emerged. Below is a brief description of the most popular ones.

Companies can automate their machine learning processes for a variety of purposes. Mostly, companies want to have automated insights for better data-driven decisions and predictions.

One example of a real-life use case of AutoML is fraud detection by Paypal. Fraud detection is the process of identifying and preventing unauthorized financial activity. This can include fraudulent credit card transactions, identify theft, cyber hacking, insurance scams, and more. Paypal used AutoML to improve its existing ML solution’s accuracy to 95% and reduced model training time to under 2 hours.

At its core, every effective AutoML service needs to solve the fundamental problems of deciding which machine learning algorithm to use on a given dataset, whether and how to preprocess its features, and how to set all hyperparameters given a time and memory budget. This is the problem that Auto-sklearn tries to address.

In general, we can see that the Auto-sklearn has three main components:

Auto-sklearn applies meta-learning to select instantiations of our given machine learning framework that are likely to perform well on a new dataset. More specifically, Auto-sklearn has been trained on a large number of datasets in order to find out which models perform best on which types of data. Once Auto-sklearn is presented with a new dataset, it computes a number of meta-features (general statistics about the data). These meta-features are used to match our new data to one of the many, above mentioned, datasets that resemble it the most. This way, we already know some models and ML frameworks that could potentially perform well on our new data. It serves as a “warm start” for the optimization process.

Bayesian optimization is a powerful strategy for finding the extrema of objective functions that are expensive to evaluate. It is particularly useful when one does not have access to derivatives, or when the problem at hand is non-convex.

Let’s consider c(x) the cost function associated with the ML framework block, with x being the different configurations it can have. This is known as the objective function. c(x)  is a black box function for which we want to find the global minima, i.e., find the best performing configuration of hyperparameters for the ML framework. Let’s suppose that c(x) has the following “true” shape.

After a certain number of iterations, we ought to find a global minimum. Note that this method does not make any assumptions about the objective function (except that it can be optimized), and doesn’t require any derivatives. So what makes it Bayesian, exactly?

The essence of Bayesian statistics and modeling is taking into account a prior (previous) belief in light of new information to produce an updated posterior (‘after’) belief. This statement is mathematically represented by the famous Bayes theorem.

This is exactly what surrogate optimization in this case does, so it can be best represented through Bayesian systems, formulas, and ideas. However, in order to apply the Bayes theorem, we have to represent the surrogate function as a probability distribution. This is done using a Gaussian Process.

What follows is a visual example of Bayesian inference with Gaussian processes to better understand it. Let’s say we have an unknown function we’re trying to estimate. Our prior belief about the unknown function is visualized below. On the right is the mean and standard deviation of our Gaussian process — it’s 0 since we don’t have any knowledge yet. On the left, each line is a sample from the distribution of functions and our lack of knowledge is reflected in the wide range of possible functions and diverse function shapes on display.

The updated Gaussian process is constrained to the possible functions that fit our data which results in a narrower distribution of functions.

Bayesian optimization is primarily used to optimize expensive black-box functions. It can be performed as such:

Ensemble methods is a machine learning technique that combines several base models in order to produce one optimal predictive model. It is well known that ensembles often outperform individual models and that effective ensembles can be created from a library of models. They perform particularly well if the models they are based on are individually strong and make uncorrelated errors. Since this is much more likely when the individual models are different in nature, ensemble building is particularly well suited for combining strong instantiations of a flexible ML framework.

How to run Auto-sklearn on Qarnot

The data showcased in this article is the electricity data set. This data was collected from the Australian New South Wales Electricity Market where electricity prices are set every five minutes based on supply and demand.

The dataset contains 45,312 instances dated from 7 May 1996 to 5 December 1998. Each example of the dataset refers to a period of 30 minutes. Given this historical data, we have to predict whether the electricity prices will go up or down. This is called a binary classification problem and our class labels are UP and DOWN.

We want to build the best possible ensemble using Auto-sklearn in a given time frame. The best way to do so is to train multiple models in parallel and increase our chances of building a strong ensemble. A solution to this is using the Qarnot HPC service, which is well adapted for parallelizing Auto-sklearn’s computation across multiple nodes in a cluster.

Next, we need to create locally an input folder inside of which we put the necessary files for the computation:

What follows is the Qarnot run script and configuration file located at the same level as the input folder:

All that’s left to do is follow these steps to set up a python virtual environment and install the Qarnot Python SDK.

Once the environment is ready with all the necessary files, you can run python3 cluster_run.py from your terminal to launch the computation on Qarnot.

In the following example, we will run Auto-sklearn on a 3 node (1 master and 2 workers) cluster for a total training time of 15 minutes and 5 minutes time limit per model trained. 80% of the data will be used for training and validation while 20% will be kept as a test set. These parameters and others can be set in cluster_run.py.

You can then view the details of the task on your own console or on the Qarnot console by clicking on your task. Once the task has finished running, several output files will be automatically downloaded to your computer. The figure below is one of them. It is a heatmap of the confusion matrix showing the final ensemble’s predictions across the two classes knowing their true labels. 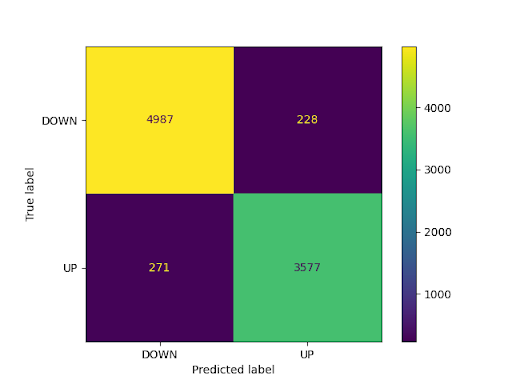 After 15 minutes of training on 3 nodes, the final ensemble achieves a test accuracy of 94.49% (more information is available in log_autosklearn.log file). These are very good results considering the short execution time and relative ease of use.

To showcase the benefits of parallelizing across multiple nodes and cores we propose the following benchmark done on the Qarnot platform. We ran Auto-sklearn for 25 mins on the same data using different configurations:

Note that on a multiple node cluster, one node is the master which handles task scheduling and Bayesian optimization and the rest of the nodes are the workers that actually train the machine learning models.

We chose to base our benchmark on three metrics: 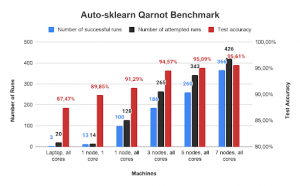 We can see that the number of attempted and successful runs increases at a steady rate. So the more cores we have the more potential models we can train. In theory, increasing the number of attempted and successfully completed runs could lead to improving performances on any problem. The test accuracy also improves as we increase the number of nodes in the cluster. However, its growth rate slows down eventually. It means we are nearing the best possible performance for this specific problem with auto-sklearn.

In this article, we introduced the concept of AutoML as well as several of the most-used frameworks, specifically Auto-sklearn. We briefly went over how it works and how to perform an accurate prediction on electricity prices using a multi-node cluster on Qarnot.

To go further in the field of AutoML, one could look into AutoML systems for automating deep learning like AutoKeras or H2O. Technologies like these are quite promising because the task of fine-tuning a neural network (number of layers, depth of layers, optimizers, etc…) is no easy task and could benefit greatly from the AutoML philosophy.

Craving more machine learning articles? You could also read one of our other articles, and learn how to train your own neural network on Qarnot for weather prediction. We hope you enjoyed this tutorial! Should you have any question(s) or if you wish to use our platform for heavier computations (we can provide state-of-the-art resources on demand), don’t hesitate to contact us.