Ascendance and Qarnot team up for CFD cloud computing project

Fluid dynamics is a domain of physics dedicated to the study of the motion of fluids. It all began with Archimede and his famous buoyancy force exerted on a body immersed in a fluid. Many developments in this area were performed over the centuries. Then, Euler and Navier-Stokes went further by sharing partial differential equations still used nowadays. A drawback of these equations is their complexity : it was almost impossible to use them in applicable cases.

In the 90’s, the rising computing power available made possible the study of industrial cases by resolving numerically these equations, it is where Computational Fluid Dynamics (CFD) comes into play. Now this domain is under active development and CFD calculations are performed in a lot of sectors like meteorology, aerospace or the automotive industry.

Many commercials and open source softwares offer numerical solvers. The one we will focus on here is OpenFOAM, first developed in 1989.

Ascendance is a French company created by four former Airbus engineers members of the E-FAN team. They wanted to make use of their assets to create a unique aircraft taking off and landing vertically with electric engines, crossing with a thermal engine and able to carry up to four people. To build such a vehicle, the optimization of the behavior, the consumption and the noise are of major interest, and all related to fluid dynamics. To perform their studies they used the open source software OpenFOAM running on Qarnot platform.

Ascendance heard of Qarnot for the first time in a startup oriented meeting and got in touch via the ScaleMax website. Our startup program offers up to several thousands of computing hours. The choice is made on various criteria such as age of the startup, technology field, inline with Qarnot’s strategy, etc…

For their calculations, Ascendance needed a different version from the default one provided by OpenFOAM. One advantage of open source softwares is their modularity and the possibility for the user to customize the code to its needs. To respond to this request, we created a Docker image containing the OpenFOAM version they required and included the customized piece of code Ascendance sent us. Then, to ensure that the customized version of OpenFOAM was fine, we exchanged on a regular basis during the image’s implementation, and we loaded this Docker image on a private registry hosted at Qarnot.

To be in line with their schedule, Ascendance required a minimum computing power so that the calculations were completed overnight. Qarnot proceeded to a benchmark on the platform to compare performances of the Central Processing Units (CPUs) available so that Ascendance could choose the best CPUs for its needs.

Below is an example of a run.py file used to run a simulation on the platform where the docker-batch profile (line 10) is used (a profile is a pre-filled configuration that makes the computing easier to run, with less parameters to fill).

For Ascendance we created a profile with some default parameters such as the Docker image registry and repository and the CPU they would use in such a way that their performance never changes.

To post-treat and visualize CFD results, another software must be used which is Paraview. Often, outputs of CFD calculations are disk memory consuming which lowers the efficiency of Paraview on traditional computers. To overcome this issue, we installed Paraview on our platform to provide a fluid visualization of the results. A profile has also been created for this purpose.

Hereafter is a picture of a use case sent by Ascendance visualized on a remote Qarnot computer: 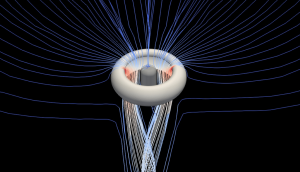 We were pleased to receive a very positive feedback from Ascendance regarding our platform, which can be summarized in these points :